Leadership is the ability to influence a group towards the achievement of a vision or a set of goals.

Universalist theories stem from the belief that all leaders will have certain traits that will contribute to effective leadership.

The ‘great person theory’ was previously known as the ‘great man theory’, mostly because leadership was once considered to be a predominantly male quality. This theory basically follows the quote: “great leaders are born, not made”; meaning that it supports the nature debate.

Behavioural theories stem from the belief that the effectiveness of a leader depends on how they behave.

A study was conducted on behaviour that differentiated leaders from non-leaders. Two dimensions were found in the study:

A study was conducted in which two types of leaders were found:

Fred Fiedler’s theory states that there is no singularly best style of leader; instead, a leader’s effectiveness is based on the situation they are in. A match has to be made between the leader’s style of interaction with subordinates, the degree to which the situation gives control and influence to the leader, and the respect subordinates have for their leader. These three factors will lead to effective leadership.

The effectiveness will be the result of two factors: leadership style and situational favourableness.

This is a contingency theory that focuses on the “readiness” of followers. This term, as defined by Paul Hersey and Ken Blanchard, refers to the extent to which people have the willingness and ability to accomplish a specific task.

The situational leadership theory states that leaders should change their leadership styles based on the maturity of the people they are leading and on the details of the task. So basically, the leadership style should depend on the followers’ readiness and the task they must carry out. 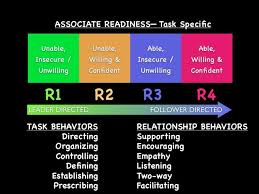 A summary of the situational leadership theory

Robert House’s path-goal theory basically states that it is a leader’s job to provide followers with information, support and other resources that are needed to accomplish a specific goal. An effective leader will clarify the path that needs to be taken in order to achieve the goal. They will also help their followers along this path and reduce any ‘roadblocks’. This ‘path leading to goal’ basis is where the term “path-goal theory” comes from.

These leadership styles are not mutually exclusive; leaders can select more than one kind of style or change their style according to other factors, such as the situation or follower needs.

Environmental contingency factors, otherwise known as “work environment characteristics”, include factors such as task structure and team dynamics. These are not in the employees’ control.

Personal characteristics are factors such as employee needs, experiences, perceived abilities, satisfaction, anxiety, willingness to leave the organisation, and the locus of control.

There are many different styles of leadership. Some have already been mentioned above, but here is a general list of some main styles:

Democratic – a style in which leaders take workers’ suggestions and workers participate continuously, though leaders have the final say.

As mentioned above, an autocratic leader makes all decisions alone and does not ask for or consider subordinates’ opinions and suggestions. A permissive leader is more communicative during their decision-making process by letting subordinates be a part of it, and also allows subordinates to be more autonomous.

Muczyk and Reimann (1987)
According to Jan Muczyk and Bernard Reimann, some leaders do not involve subordinates in decision making because they believe that it is their job to make decisions and the workers’ job to accomplish them. This is generally the case when leaders consider that they have the most, or the best, information than the rest of the employees and that they are capable of making lone decisions. Muczyk and Reimann also state that this autocratic style of leadership should be used when employees are new and learning about their job. In this case, an autocratic leader would basically be training the employees, providing them with new knowledge and skills, and so on. They also believe that autocratic leadership should be used when fast decisions are needed and when there is no time for consulting others.

Most leaders need to be taught how to cultivate certain skills, such as: building trust, optimistic thinking, flexibility, empathy, healthy communication, methods of monitoring, authenticity, articulation and quick-thinking. They may do this by attending seminars, training courses, workshops or other similar events in which lectures are given, tips are swapped and training is carried out through a variety of methods. The leader is encouraged to develop their skills for the benefit of their organisation, their employees, and themselves.

Fred Danserau’s leader-member exchange model is also called the LMX theory. The idea behind this theory is that leaders form two groups within their subordinates: an in-group and an out-group.

This theory is also known as the “leader-participation model” and was proposed by Victor Vroom and Philip Yetton. It a leadership theory which provides a set of rules to determine the form and the amount of participative decision-making in different situations. Basically, this model has identified five different styles about the situation and the level of involvement.

Manager shares their issue with subordinates in a group session and coordinates their efforts to think of a situation as a group.

2 thoughts on “Leadership and management”

Leave your comments below! Cancel reply